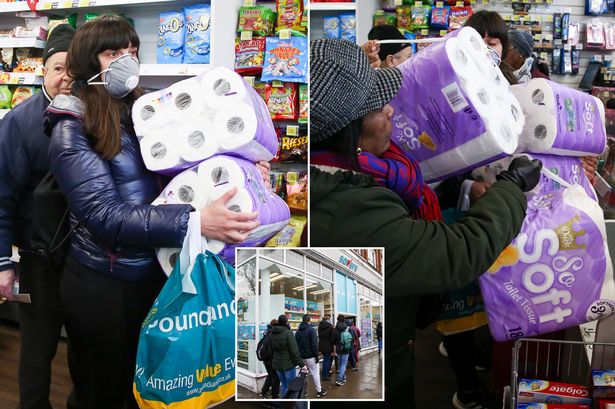 A 56-year-old man was mugged for his loo roll – moments after he found two of the few remaining packs in a London shop.

The victim, Dinendra, was leaving discount store Savers when someone ran up behind him and snatched one of the rolls he was carrying.

Loo roll has been in high demand following panic buying across the country as people prepare for a country-wide lockdown over coronavirus. The shaken shopper called the police after he was jumped outside Savers in Harringay, North London.

Huge crowds formed at the Savers Dinendra was shopping at today, with some shoppers being snapped grabbing 18 loo rolls.

He told MailOnline : “I was shaken and shocked. Is that what we have come to? Its not the value of the toilet roll, its the principle.

I’m concerned about the vulnerable people, the elderly. In terms of their health and their emotions as well.”

Metropolitan Police said the incident has not yet been reported.

Many supermarkets have put restrictions on essential items such as loo roll, hand wash, hand sanitiser and pasta following empty shelves across many of the country’s stores. Budget supermarket Aldi said today customers would only be able to buy four items of the same product in its stores.

Tesco has imposed a limit on certain items including pasta, baked beans and UHT milk – which will all be limited to five per person.

Strict restrictions on when supermarkets can deliver to people’s homes will also be scrapped to help retailers meet the increased demand.

Meanwhile British Retail Consortium members have sent a joint letter to consumers asking everyone to work together to ensure there is enough food for everyone. The letter asks for people to be more considerate and to look after those who are elderly, vulnerable or choosing to remain at home.

The number of confirmed coronavirus patients in the UK has jumped by 342 taking the total of confirmed cases to 1,140. The UK death toll is 21