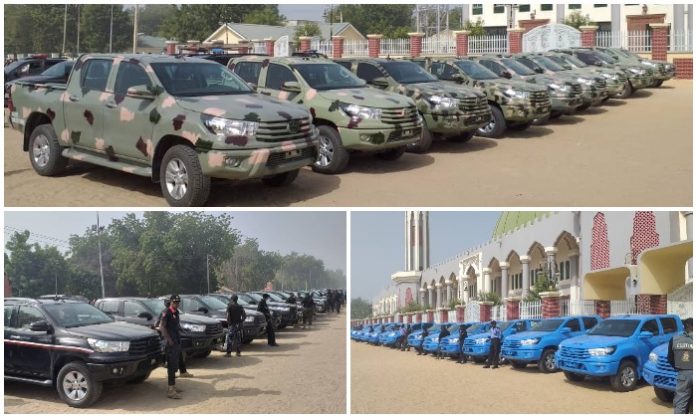 Borno State governor, Prof. Babagana Umara, on Friday released 70 patrol vehicles to support the fight against insurgency in the State.

The vehicles were released to the Nigerian Army, the Nigeria Police Force, volunteers in the Civilian Joint Task Force, hunters, as well as all those involved in the fight against Boko Haram.

The vehicles were released at the Shehu palace in Maiduguri where a Rapid Response Squad was launch to combat terrorism and criminal activities in the State.

The governor directed that the larger number of the latest Hilux vehicles released should be used by hunters and civilian JTF to patrol the Maiduguri-Damboa road while vehicles painted in military colours were received by the head of the military counter-insurgency in the Northeast and Theatre Commander of Operation Lafiya Dole, Maj. Gen. Olusegun Adeniyi.

Other vehicles were allocated to police and other security agencies.

The Governor assured the citizens of his administration’s commitment to security of lives and property, and further called on traditional and community leaders to re-dedicate themselves to mobilizing participation in vigilance and generating local intelligence, warning that under no condition must any citizen harbour insurgents and those perpetrating criminal activities.

The governor praised the military, other security establishments and volunteers for their sacrifices in battling Boko Haram in the State.

Theatre Commander of Operation Lafiya Dole, who was represented by his deputy, Major General M.G. Ali, thanked the governor for being consistent in supporting the military through far-reaching interventions.