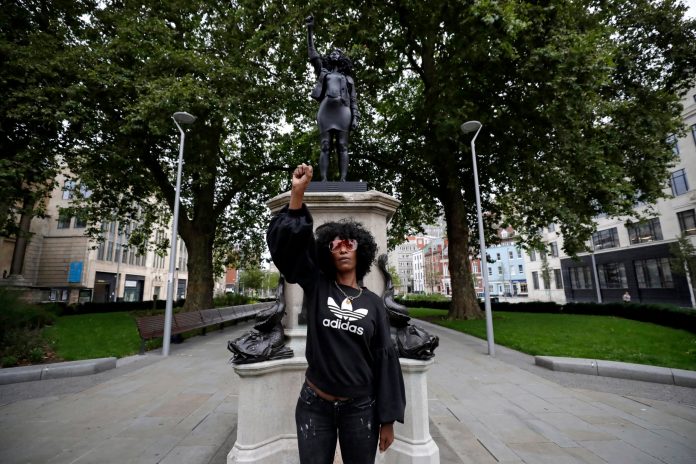 Black Lives Matter activities have replaced the toppled statue of Edward Colston in Bristol with a sculpture of a personality figure representing the movement.

A team of 10 people, directed by the artist Marc Quinn, erected the figure of Jen Reid at around 5am on Wednesday, according to STANDARD UK.

The protester was pictured standing on the plinth previously held by the 17th century slave trader with her fist raised after it was torn down and dumped in Bristol harbour in June.

The Colston statue was fished out of waters earlier this month and is being restored for a museum. However, Bristol city council is yet to decide what will stand in his place.

In her reaction to the hoisted statue, Ms Reid that to represent the BLM movement was “massive”, but “it would be just as big if it was someone else representing the same thing. This is going to continue the conversation. I can’t see it coming down in a hurry,” she told Guardian UK.

“I’ve always felt it’s part of my job to bring the world into art and art into the world,” Mr Quinn said on the sculpture.

The artist previously made a series of works inspired by the country-wide riots that followed the police killing of Mark Duggan in 2011.

Cambridge University to hold all lectures online until summer 2021