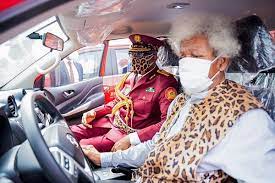 He said the security unit was not established to compete with other security agencies but to further strengthen the security apparatus of the state.

Speaking yesterday at the inauguration of the Amotekun at the Arcade Ground, Oke-Mosan, Abeokuta, Governor Abiodun, who decorated Nobel laureate Prof. Wole Soyinka as “the super marshal of Amotekun Corps”, noted that the security challenges facing the state and the nation as a whole needed the cooperation of Nigerians and security agencies.

Prof. Soyinka noted that the Amotekun was not created to replace other security agencies.

He decried the invasion of his Abeokuta home by yet-to-be-identified burglars.”‘

Police Commissioner Mr. Edward Ajogun said a lot of ground needed to be covered in the war against crime.

The Director-General, Development Agenda for Western Nigeria (DAWN) Commission, Mr. Seye Oyeleye, said Amotekun was a child of necessity and not a regional army.

JUST IN! UK court rules Nigeria can appeal $9.6b judgment