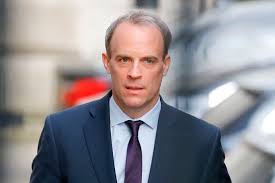 United Kingdom’s Foreign Secretary, Dominic Raab has said he would not participate in the kneeling gesture, in solidarity with Black Lives Matter protesters, adding that it appears to be more a ‘symbol of subjugation’ than one of ‘liberation and emancipation’

The Foreign Secretary who made his opinion known while he spoke on TalkRadio on Thursday, suggested the gesture appears “to be taken from Game of Thrones”.

“I take the knee for two people; the Queen and the Mrs when I asked her to marry me,” he said.

Further explaining his position, he said, “I understand this sense of frustration and restlessness that it driving the Black Lives Matter movement.

“I’ve got to say, on this taking a knee thing, I don’t know, maybe it’s got a broader history but it seems to be taken from The Game of Thrones, feels to me like a symbol of subjugation and subordination rather than one of liberation and emancipation.

“But I understand people feel differently about it so it’s a matter of personal choice.”

Former NFL quarterback Colin Kaepernick has been credited with inspiring the ‘take a knee’ gesture after the ex- San Francisco 49ers star dropped to one knee during the American national anthem at a pre-season game in 2016 to indicate his anger at racial injustice in the US.

Mr Raab statement has met with criticisms from different quarters, notably Good Morning Britain host Piers Morgan commented: “Unbelievable. Foreign Secretary @DominicRaab thinks taking the knee is from Game of Thrones. This Government continues to shame us to the world.

Taking the knee has become widespread in recent weeks amid a wave of global anti-racism protests sparked by the death of George Floyd, an African American, in the US last month.